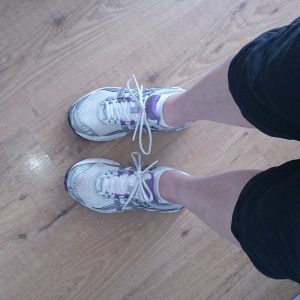 For those of you who are unaware, before we got married, I used to run a fair amount. I’m not going to say that I was a runner because I definitely didn’t class myself as fit enough for that.  However, I’ve done a few 5k’s in my time and even a 10k! After the wedding though, we went away and when we came back I just got a bit lazy and then a bit pregnant and whilst I wanted to exercise, I didn’t want to start running again as it’s not really safe to do so in the first trimester.

After having sprog I did a few classes, I was quite an addict of BabyFit at the leisure centre for a while as it brilliantly included the babies in the class! Then sprog’s nap times etc changed and we couldn’t make it.  After that, I gave Powerhoop a go. I loved that as it really worked my core but I found that my knees were hurting too much to be able to get better at it (turns out that was sprog’s fault for messing with my pelvis and shoulders)!

And then I went back to work. There was no exercise, time for exercise or will for exercise.

Now, I know as much as the next person that the best way to loose weight is to eat sensibly and exercise. I’ve only been managing one of those, half of the time!  I have managed to get to pre-sprog weight but it is definitely not in the same place and after reading Belle Du Brighton’s blog, I realised that my body confidence is so low and that I need to shift about 1/2 a stone more.

After much procrastination, this afternoon I finally shifted my bum into gear.  I’m using the opportunity of sprog at nursery in the summer holidays to do two things – get my planning and prep for September done and find some time for ‘me’.  If one of things that is bugging me most about being ‘me’ is my new found ‘apple’ shape instead of ‘hourglass’ shape then maybe I should do something about it?! Maybe?! But then maybe, it will magically disappear…. but it hasn’t done so far and he’s nearly 1?! Can’t you just hear me talking myself out of it?!

Running shoes on, unsexy leggings on, and everything else was still exactly where I left it before the wedding – watch and cap in the drawers by the front door along with a super sexy bumbag to put phone and keys in, and running drinks bottle in the cupboard.

I’m starting off with C25k which I have done a few times before and when I was a completely novice runner, I remember that first run being so very difficult.  60 seconds of running does not sound very long, but back then it felt like an eternity.  So imagine my surprise when I ran the first few today and found that I was reasonably fit!!  Don’t get me wrong, as I lifted one foot in front of the other for the first few paces I can only describe the feeling as my uterus crying… “noooooooo…I thought we were done with this exercise malarkey…I thought you were going to let us get round and eat lots of yummy cake together forever more” I almost apologised out loud to it!

Before I knew it, I was into a familiar breathing pattern, I could feel the steady warmth building under my cap and the sweat start to run. Whilst I may be fitter than I expected (clearly running around after sprog is doing some good), I still sweat just as much as before… I’m still rosy cheeked now!

When I got back home, I remembered the sweet satisfaction of knowing that my body had just done something good for it, of knowing that I had done more than I had expected to be able to and of looking in the mirror and seeing a round, red face staring back at me!  All in all it was a good run…next time, I’ll try and go before it gets too hot though!

One thought on “Run Mama, Run”

I love to hear from you in all different ways

Mama to Sprog (born Aug 2013), full time teacher and trying to find the balance between everything

Back to the Beach

Worthing Art Studios at the Lido

on a journey of (re)discovery in a brave new world.